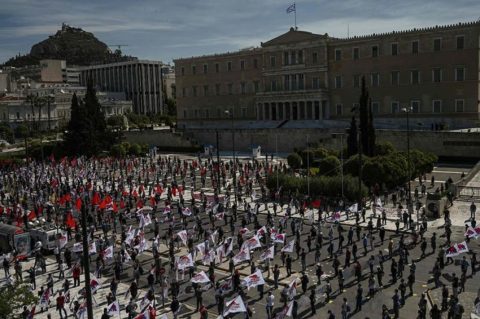 may day turkish comrades of Partizan in the FRG 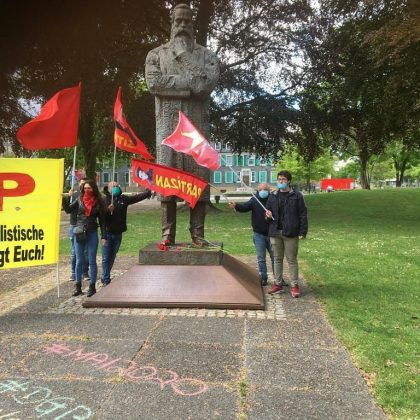 THE REAL VIRUS IS THE IMPERIALIST CAPITALIST SYSTEM!

THE REAL VIRUS IS THE IMPERIALIST CAPITALIST SYSTEM!
Glory to May 1st, Workers Day of International Unity and Solidarity!
We welcome another May 1st, which is the day of international unity, solidarity and struggle of the working class. May 1st, 2020 takes place in the shadow of the world-wide popular riots in the last months of 2019 and the Covid-19 virus outbreak that threatened the whole world in recent months. The imperialist capitalist system does not give the world proletariat and its peoples anything other than hunger, poverty, unemployment, war and migration. Now, a pandemic has been added to these problems.
In the second half of 2019, the conditions imposed by the imperialist capitalist system on the working class and the broad laborers led to the masses rebelling and performing mass demonstrations and actions in more than 40 countries worldwide.
Another consequence of the system’s excessive ambition to profit and exploitation is epidemic diseases. Today, the Coronavirus has spread to almost the whole world and has become a threat to humanity and once again reveals the reality of the class society we live in. The decisive factor in the emergence and spread of the outbreak is the excessive profit ambition, exploitation, occupation and plunder of the imperialist capitalist system. Capitalism is increasingly interfering with nature, this situation leads to ecological problems, climate change, etc. This reality brings with it the increasing exposure of the peoples of the world to “natural” disasters, deaths from air and environmental pollution, virus outbreaks, deaths from hunger, poverty and thirst.

The bourgeoisie has “created itself a world as it wants” over time and this has brought humanity to new threats such as outbreaks. Due to the Covid-19 pandemic, millions of people were infected and hundreds of thousands of people have died. Another decisive reason for this is that the capitalist imperialist system transforms the health sector into a profit instrument. An entire sector, primarily vaccine studies, has been organized according to the needs of the capitalist system, and the profit of companies and monopolies has been brought to the fore. This situation increases the casualties even more.
The outbreak is not a cause but a consequence. The real threat to humanity is the imperial capitalist system.
We have no alternative but to struggle against the imperialist capitalist system to survive; build a world without classes, borders and exploitation. In accordance with this fact, May 1st, 2020 should be instrumental in the international unity, struggle and solidarity of the working class.
May 1st; It is the day that our demands are shouted and our solidarity is strengthened!
The Turkish state has once again demonstrated in the face of the pandemic that it is the enemy of the working class and the enemy of the people. The fascist state has “shielded” the ruling classes with the packages which was declared under the name of precaution, while it is low enough to distribute cologne and send an IBAN number to the working class and the public. With the curfew they announced at the last moment under the name of measure, with the practices that marginalize the elderly, etc. instead of protecting the working class and the people from the pandemic, they caused it to spread. Every step they take, every policy they put into practice is not aimed at protecting the interests of the working class and working people, but their own class interests.
On the one hand, the people living in their palaces call for “stay at home” and on the other hand, they are called “the wheels must turn” and work is imposed on the working class and laborers at the expense of death. With the law enacted, unpaid leave is imposed on the working class and strikes are prohibited.
The Turkish ruling classes said, “We will turn the pandemic into an opportunity,” and also prevented the solidarity of the people, banned the aid campaigns of the municipalities, and continued to appoint trustees and arrests in Kurdish provinces. They have made amendments to the law of execution and released murderers, rapists, child abusers, mafia members, but they have left communist and revolutionary prisoners and opponents to die in prisons.
Against these public enemy policies of fascism, the working class and working people must once again express their demands on the occasion of May 1st. Apart from compulsory sectors (working conditions should be improved, health and hygiene conditions should be provided and working hours should be arranged for these sectors as well), production should be stopped and working class and public health should be prioritized. Layoffs should be banned, and paid leave should be given to all employees. In factories, workshops and fields; everywhere life is produced, we do not have any choice but to strengthen the class consciousness, increase our struggle, adopt our struggle to the new conditions against those who think we deserve to die but they to live.
Long Live Proletarian Internationalism!
May 1st must be a day for the working class and the oppressed peoples of the world to consolidate solidarity!
May 1st must be a day to increase the solidarity of the working class and the oppressed peoples!
May 1st must be the day of the struggle of the working class and the oppressed peoples of the world against imperialism, capitalism, feudalism, fascism, patriarchy and all kinds of reactionary!
Long live the proletarian internationalism!
Long Live TKP-ML, People`s Army TİKKO, Women Organization KKB, Youth Organization TMLGB!
TKP-ML Central Committee Politburo
April 2020
Englısh: https://www.tkpml.com/tkp-ml-central-committee-politburo-the-real-virus-is-the-imperialist-capitalist-system-glory-to-may-1st-workers-day-of-international-unity-and-solidarity/ 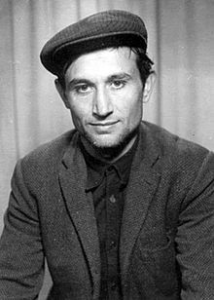 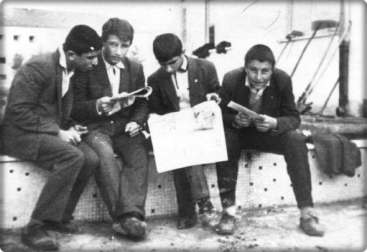 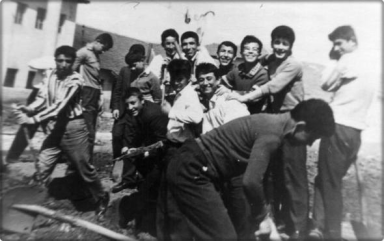 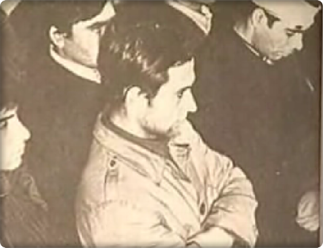 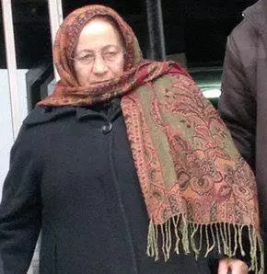 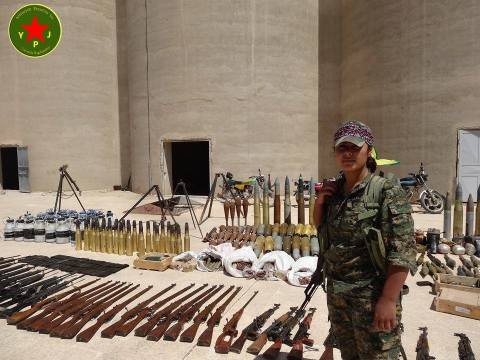 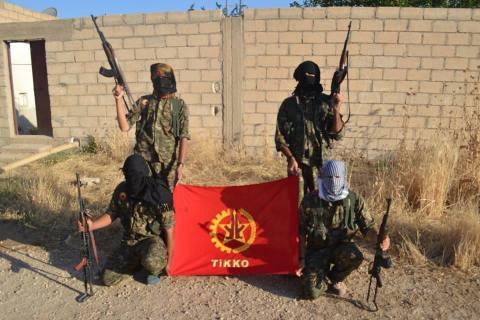 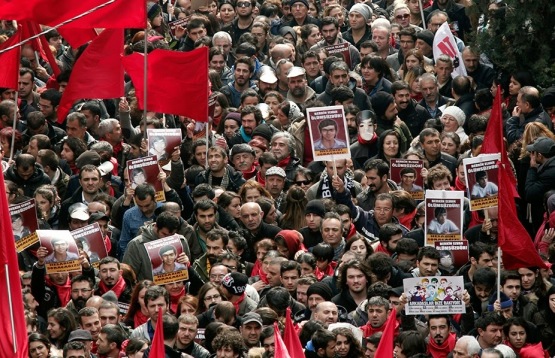 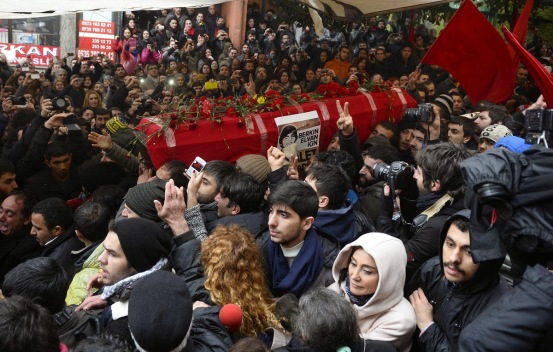 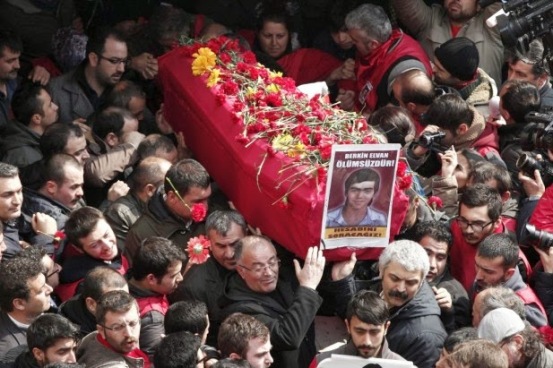