we would like to draw your kind attention towards the recent ban imposed by the current Government of Nepal ( March 12, 2019)
against the Communist Party of Nepal (Led by comrade “Netra Bikram Chand – Biplov”).

This move of current pseudo communist Nepal government dangerously synchronizes with the historical social fascist acts against the fundamental human/political rights and righteous people’s movement. Hundreds of party sympathizer and supporters, party members and leaders are being systematically arrested and tortured across the country. Fabricated fake legal cases are being manufactured by the state agencies against the detained individuals. Further, cadres from sister organizations (such as Students wing, Teachers wing, Workers wing) politically supporting the Communist Party of Nepal (Biplov) are also equally terrorized by the state agencies. This political ban and ongoing systematically organized state sponsored horror simply violets all fundamental sociopolitical rights of any human being.

In this regard, we will highly appreciate if your party can spare few minutes to critically evaluate the recent political situation of Nepal.

We sincerely expect to receive your support and solidarity in the struggle towards the scientific socialism led by the Communist Party of Nepal (Biplov) against the fascist ban imposed by the government of Nepal.

Communist Party of Nepal (Biplov) is the sole heritor of the historical Nepalese people’s war (started in 1996-) that was regrettably dissolved by former comrades Prachnada and Dr. Baburam Bhattarai surrendering in favor of old parliamentary systems. This party identifies the “Indian monopoly capitalism” and Indian expansionism closely collaborating with the Anglo-European American imperialism as the root cause of sociopolitical suffering in the south asia. Further, it puts forward the concept of “unified people’s revolution” in an active participation of people supported by the revolutionary party as a path towards the scientific socialism.

Additionally, Nepalese people’s progressive front (NPPF), Europe is a Nepalese diaspora which acts as a common forum of progressive Nepalese living in Europe. Apart from its social activities, NPPF stands for fundamental human rights, freedom of speech and rightful people’s struggle in Nepal and around the world.

KATHMANDU, Jan 1: CPN (Maoist Revolutionary) and Communist Nucleus Nepal have merged.
Maoist Revolutionary Chairman Mohan Baidya and Nucleus Nepal coordinator Bhupendra Neupane announced the merger amid a program in the Capital today.
Addressing the event, Baidya underscored the need for waging and concluding people’s revolution to establish scientific socialism in the country while pitching for an unity among communist parties to save the country and its nationality from foreign interference.
Likewise, the Nucleus Nepal coordinator Neupane stressed the need for saving the country from division and fulfilling aspirations of the people that followed political change. 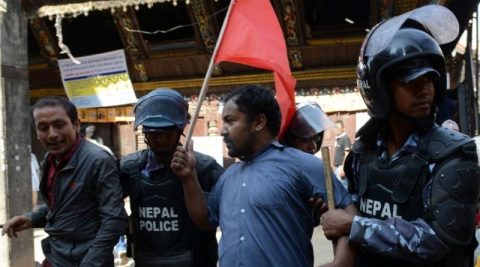