The International Committee organized the vision of “Chakravyuh”. A broad introduction summarized the two previous days of actions in Palermo, and treated the situation in the Indian subcontinent, the current stage of the People’s War and the Operation Green Hunt, currently focused on the democratic opposition and intellectual who expose the crimes of the Indian regime and the genocide in the name of “fighting terrorism”.
At the end of the movie, another presentation described some aspects recalled by the mocie, as the birth of the CPI (m) decades after the struggle of Naxalbari in 1967 (which gave birth to the Maoist movement in India), the recent treaty with US imperialism and the economic and military cooperation with Israel, the organization of the PRCs as embryo of a new society. Finally, a comrade of the Revolutionary Proletarian Feminist Movement presented the fresh issued pamphlet “Within the People’s War in India, the revolution in the revolution of women” treating the role of women in this great revolution, including an article of the well-known Indian writer Arundathy Roy about the violence of the Indian state against women, particularly against thosewho join the ranks of the Communist Party of India (Maoist ) and People’s Liberation Guerrilla Army. The participation has been marked by a majority of young female students as well as womens workers who have been distributed the pamphlet.

Bergamo
The solidarity and example of Maruti workers in Manesar, who dared challenge the command in the factory and became a “danger for the Indian State and the national economy”,  has been brought to the workers of Same, company that today owns an important plant in Southern India.
Leaflets of the campaign have also distrubuted at the anti-fascist demonstration and among the evicted migrants struggling for the right to a house. 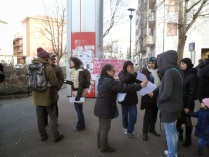 Agitation amongst the proletarians of the S.Siro Neighborhood, in majority migrants

Rome
Leaflets spread at the demo of the movement of house-occupiers. The protester, almost all migrant welcomed with interest and brotherhood the message from Indian proletarians led by Maoists

This site uses Akismet to reduce spam. Learn how your comment data is processed.